“If a picture doesn’t tell a story is not a photograph. Maybe it’s the story of all our thoughts, which ones become public and challenge stereotypes and  those ones that remain confined for shame.”

Jan Saudek’s photographs leave no one indifferent. They cause in the viewer  a visceral rejection or an unconditional appreciation. Underlining  the texture and the atmosphere of the landscape that surrounds the characters of the photos, Saudek has recreated a disturbing effect of violence and a unique expression. His themes are repeated obsessively. Through a cheeky use of sexuality (at the limit of pornography), he  gives a grotesque and symbolic vision of the relationship and sexual play managing to keep a poem, in the tragedy of contrasts and symbolic messages.  The human figure in its raw beauty or obscene truths,with her age, her cares of life and death through dreamscapes dream or nightmare.  Saudek ,with straightforward language and full of sensual charge, tells about the beauty of imperfection: very fat or very thin women, with stretch marks, cellulitis and sagging breasts. Thanks to his style, he became one of the first Czech photographers to be known in the West, even if it was the source of several problems with the communist authorities in his country.  But the originality of his photographic proposal is indisputable. It’s a desire to portray a different world, the extreme radicalism of his ideas. 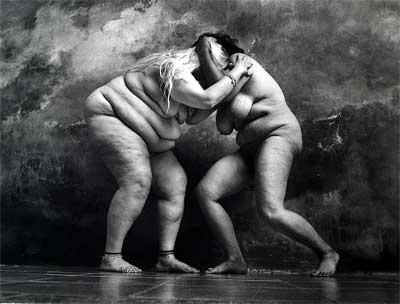